english, Statements
1 month ago
by admin
0

Today marks the first anniversary of the military coup of October 25th. A year after the 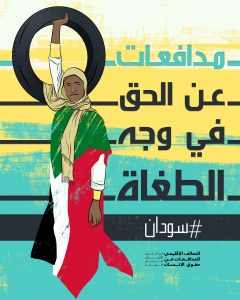 According to medical reports, at least 50 cases of sexual violence were reported since October 25th, 2021. Medical sources confirmed receiving over 20 cases of rape, among them 3 cases of gang rape by Sudanese security forces. Dozens of cases of sexual harassment and assault during protests and in police stations were reported by women rights groups since the military coup. Hardeen, a group providing medical assistance to protesters, documented at least 50 major injuries of women protesters, including permanent loss of sight, and spinal injuries among, other serious medical problems. The injuries documented were mostly caused by gunshots, gas canisters and beating aiming to cause serious physical injuries targeting protesters, head, chest and neck.

The conflict areas witnessed accelerating intercommunal violence that led to the displacement of 211 thousand people from January to September 2022. According to WFP reports, over one third of the Sudanese population have reached the stage of hunger. This years’ floods impacted over 340 thousand people across Sudan. The United Nations and WFP announced calls for urgent support to avoid humanitarian catastrophe led by conflicts, climate disasters, political instability and collapsing economy. Sexual violence in conflict areas increased since the coup, while the victims had limited access to urgent medical care and psychological support due to the general security and economic conditions.

Women rights groups and WHRDs are struggling to protect the ground gained during the transitional period.There are systemic attacks on women’s participation in the public sphere which is shrinking the civic space for the work of WHRDs. Women groups and WHRDs continue to struggle to protect their lives, while working to make progress on the ground. The limited resources and capacity to tackle the overwhelming crisis are adding to the challenges WHRDs are facing everyday.

Since the military coup on October 25th, 2021, systemic violence against women increased across the country. The return of fundamental Islamic leaders to the political scene in support of the military led to an increase in oppression of women’s rights. The police force under the Public Order Laws was recreated under the new name of “social police”, which is considered a major setback for women’s rights in Sudan. Women and girls are constantly being scrutinized for what they wear and how they appear in public. University officials have imposed dress codes and prevented some female students from entering the gates without a scarf. The former regime imposed hijab in Sudan for three decades prior to the revolution in 2018. Within one year of the military coup, women in Sudan are living under the same oppressive system once again. The military leaders are closing public spaces, using repressive laws to crush the resistance movement led by women.

Sudanese women continue to lead protests calling for transitional justice as the foundation for democratic transformation. International actors are working with Sudanese political forces and protest movements to reach a political solution to end the military coup and return to democratic transition. These efforts led to creation of a proposal of a constitutional document. While the proposed political solution has yet to materialize, the issues of justice and accountability remain one of the main points of debate. We urge the Sudanese political actors and international community to prioritize justice and accountability in any upcoming political solution. Protection of women’s rights and ending violence against women can only be acheived through a transparent, inclusive and gender sensitive transitional jusitce process, where perpetrators are held accountable for their crimes.

We the undersigned groups call for:

The Legal Targeting of WHRD and Feminist Salma El Tarzi for her Solidarity with SV Victims.

Transitions and Change in Leadership | ANNOUNCEMENT!