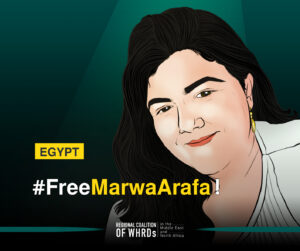 2020, where her house was raided and she was arrested after her house was searched, without the presence of a permit or authorization from the concerned body. Marwa appeared 14 days later on 4 May 2020 at the National Security Prosecution, where she was interrogated in Case no. 570 of 2020, where a warrant for her arrest was present, in addition to an investigative memo. Marwa is charged with joining a terrorist organization and knowing its objectives and committing a funding crime.

Marwa helped families affected by the incarceration of their providers, and the help she presented was seasonal, consisting of sustenance supplies, study material and medication for families, as a form of humanitarian support.

Marwa exceeded the legal duration of detention on remand, namely 2 years, and is kept away from her daughter who is a child who has not turned 3 years old.

The Legal Targeting of WHRD and Feminist Salma El Tarzi for her Solidarity with SV Victims.