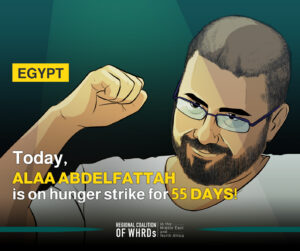 A Call to Action

The Regional Coalition for WHRDs in MENA calls on human rights and feminist organizations to stand in solidarity with Egyptian activist, blogger and software developer Alaa AbdelFattah, who is, today, on day 55 of his complete hunger strike. He started his hunger strike on 2 April 2022, due to his continued imprisonment for years, where the last verdict of imprisonment for 5 years was issued against him on 20 December 2021, for spreading false news.

Alaa AbdelFattah is an Egyptian citizen and Carrie’s a British nationality, and he has been politically active since the early 2000s. He constantly advocated for freedom of thought and expression. Alaa has experienced horrible targeting, mistreatment and torture in Egyptian prisons, and his family has been subject to constant harassment, defamation and even incarceration, including his sister, Sanaa Seif. Alaa started his hunger strike due to the authorities’ denial of his basic rights, including exercise, sun exposure, and receiving books at Tora maximum security prison, in addition to being beaten, and denied an official visit from the British consulate. After his family sent an appeal to the National Council for Human Rights, from more than 500 women calling for his release, state media started spreading lies about Alaa’s full enjoyment of his rights, and that he is not on hunger strike. Alaa was moved to the new Wadi ElNatroon Correctional and Rehabilitation Center on 18 May 2022, and continues his hunger strike until all his demands are met.

You can stand in solidarity with Alaa AbdelFattah by writing to the Egyptian authorities and British government and parliament, calling for his immediate release, as he has been imprisoned for almost 10 years. At the Regional Coalition for WHRDs in MENA, we understand states’ tactics in targeting WHRDs, HRDs and activists and making an example of them to silence all voices of dissent and those that call for the full enjoyment of the right to freedom of thought and expression. As a movement, we believe that no one should face such an ordeal alone, and we believe in the power of solidarity to alleviate all injustices that brave voices face.