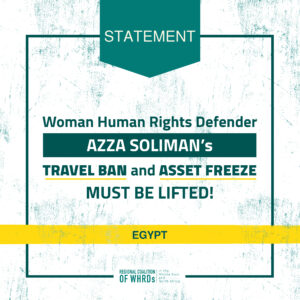 The undersigned organizations condemn the continued targeting of Egyptian Women Human Rights Defenders (WHRDs) and feminists through unjust travel bans and asset freezes despite the full exoneration of these individuals from Case 173 of 2011, known as “the NGO Foreign Funding Case.” One such case is that of WHRD, feminist, and lawyer Azza Soliman, who is facing an ongoing travel ban and asset freeze despite her exoneration. Soliman has an upcoming hearing about these restrictions at the 4th Circuit of Tora Security Institute, a terrorism court, on 13 February 2022, where her verdict will be issued.

While we welcome the fact that the travel ban of WHRD and journalist Esraa Abdel-Fattah was lifted, enabling her to travel on 9 December 2021 to Paris to receive an honorary citizenship award, Soliman still faces a detrimental travel ban and asset freeze. Other WHRDs and feminists still remain subject to prosecution in Case 173, an unjust, baseless impediment to their work and lives.

The undersigned organizations demand that the asset freeze and travel ban against Azza Soliman be lifted immediately and that Egyptian authorities drop the entirety of Case 173, including any travel bans and asset freezes associated with the case. We urge authorities to avoid further targeting of any WHRDs or HRDs formerly or presently involved in Case 173. These individuals must not be recycled to new cases or unjustly pursued on other bogus charges. The targeting of independent Egyptian civil society organizations must immediately stop to open the public sphere for the independent, safe, and productive contributions of these organizations.

#SheDefends Campaign material for the #16days of Activism Against VAW.