Case 173 and its Remnants Must b 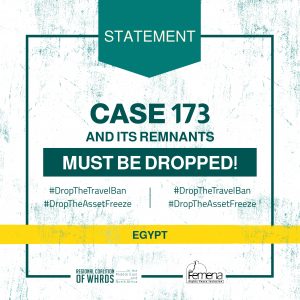 Several feminists and WHRDs have been targeted in the case, but only a few have made this targeting public. Others too fearful to speak up, have chosen to try to address their ordeal quietly.  At present at least 5 WHRDs continue to be targeted by Case 173.

Most recently, lawyer, feminist and WHRD, Azza Soliman, was exonerated from Case 173 on 30 August 2021. But that exoneration did not automatically lift the travel ban and asset freeze against her and her law firm, Lawyers for Justice and Peace. In order to lift the travel ban and asset freeze, she submitted an appeal so her request can be looked into by a Criminal Court.  Instead, the Terrorism 4th Circuit Court at Tora Security Institute took up her case. This begs the question, why is a court charged with overseeing terrorist cases assigned to rule on the travel ban and asset freeze of a feminist civil society activist and her organization? Moreover, the case still includes 5 other WHRDs and feminists, including the cofounders of the prominent ElNadeem Center for the Rehabilitation of Victims of Torture, which has been leading work against torture in Egypt for more than 25 years. The founders, WHRDs and feminists, Dr. Magda Adly, Dr. Suzanne Fayyad and Dr. Aida Seif ElDawla, who is banned from travel, have all been interrogated and subjected to judicial harassment as a result of Case 173. This judicial harassment continues despite the fact that on January 21, 2021, the Administrative court overturned the 2016 decision by the Cairo governorate to close ElNadeem. The reluctance of the courts and security agencies to close the case against ElNadeem’s founders points to the important work of the center while Egyptian authorities are trying to stifle civil society through all means possible.

Ten years after its start, the NGO Foreign Funding case continues to silence voices that speak out against human rights violations. Alarmingly, Egypt’s refusal to fully close the case and end its targeting of rights defenders and organizations shows it has no intention to open the public sphere for independent civil society.

The undersigned, representing regional and international feminist, women’s rights and human rights, organizations, call on the Egyptian state to immediately drop the charges and lift any travel bans and asset freezes against all those still prosecuted in Case 173 including Magda Adly, Suzanne Fayyad, and Aida Seif ElDawla. We also call on the Egyptian judiciary to immediately lift the travel ban and asset freeze against Azza Soliman and her law firm.

We strongly urge the international community to be vigilant about the fate of individual activists and organizations targeted in Case 173, and to ensure that Egyptian authorities end their targeting of civil society and allow them to freely carry out their work. .

The Egyptian government needs to show a genuine interest in improving the condition of human rights in Egypt by dismissing cases against civil society activists and organizations peacefully exercising their right to speak out against rights violations by both state and non-state actors.

4-Association for Women in Development. ( AWID)

16-To Be Organization for Rights and Freedoms- Yemen

19- Interdisciplinary Center for the Study of Global Change – ITSRC.

A CALL TO ACTION: UNITED FOR SUDAN AGAINST TYRANNY

#SheDefends |Launching Statement for the 16 Days of Activism