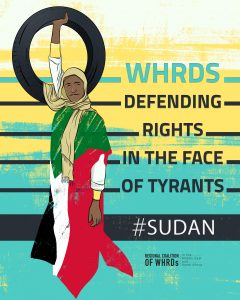 On the dawn of October 25, 2021, a military coup was attempted, where prime minister Abdallah Hamdok was among those reported to have been put under house arrest[1] along with cabinet members. General Burhan who heads the Sovereign Council declared that the military is intervening to halt the internal tensions between politicians and the military, where he claimed his purpose was to rectify the revolution’s course.

In the past months, we have witnessed a softer attempt to stage a coup that failed and where Khartoum’s streets witnessed a state of ongoing demonstrations demanding the military to stop meddling in the post revolution transitions, and most importantly, to refrain from using the same tactics and strategies used during the Era of the overthrown Omar El Bashir, such as extrajudicial killings, and arrests targeting protestors and political organizers.

Leading opposition body, the Sudanese Professional Association issued several statements today on their verified Facebook page[2] announcing the coup, and calling for a general strike in Sudan, where they called for organizing neighborhood committees that should take over the streets and face the military troops currently trying to take over Sudanese cities in an attempt to impose a curfew. Also, leading feminist organizations and groups have sent out letters to the WHRDMENA Coalition just before our communication with them was interrupted by the internet blockage, asking the coalition to coordinate and advocate on their behalf, so that more international and regional pressure is applied on the military to halt its coup immediately without any conditions.

The WHRDMENA Coalition is deeply concerned about the wellbeing of Sudanese Women Human Rights Defenders who in particular have been receiving numerous attacks by the military and forces of the intelligence that aimed to push them out of the public sphere, in which the diverse Sudanese feminist movement have been actively organizing to ensure the inclusion of equality and protection laws and mechanisms of Sudanese women throughout the transition toward a civic state.

The WHRDMENA Coalition calls on the :

Case 173 and its Remnants Must be Dropped!