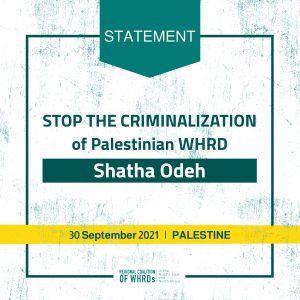 Shatha Odeh, a 60-year old Palestinian WHRD who defends the right to health services in the West Bank, and the Director of the Health Work Committees, continues to be held on remand until today, where her court session will take place on 4 October 2021. After her arrest on 7 July 2021, she experienced a vast array of violations, including denial of one of her medications until 15 July 2021, and attended 3 interrogation hearing sessions in the same clothes she was arrested wearing.

This comes after her house was raided, and the headquarters of the Health Work Committees was raided in June, and its vehicles confiscated. It is also important to highlight that Ms. Odeh, who worked on ensuring that Palestinians receive health services in the midst of the COVID-19 Pandemic, appeared in her last hearing on 17 August 2021 handcuffed and shackled. According to various reports, it is not clear what the exact charges are, and those they were able to understand include and are not limited to, the trumped-up charges of 1) Holding a position in an unlawful organization, 2) Presence in a public event on 14 May 2019, and 3) Receiving and bringing funds illegally into the area.

The COVID-19 Pandemic has been used by Israeli occupation forces as an excuse to launch an attack on Palestinian civil society and to criminalize their work, such as that of Odeh, under the pretext of “security”. This sends a powerful message to all Palestinians that they do not have the right to access services, including health services, and threatens their sovereignty. As seen in The Dignity Rising ‘intifadet alkarama’, civil society and WHRDs were targeted, arrested, and criminalized, to say the least. Moreover, while the trumped-up charges used against Ms. Odeh speak volumes to the perspective of Israeli occupation towards Palestinian WHRDs, and their constant need to silence them, until now, the voice of Ms. Odeh has not been heard and her perspective on her work and what is happening to her remains silenced.  The international community is responsible to heed the Israeli Occupation to the rule of law and immediately release Ms. Shatha Odeh. Moreover, all charges against her should be dropped and they must be held accountable for the violations committed against her. It is crucial that she returns to conducting the important work she does.

We call on the international community to support the petitions and calls mandating Ms. Odeh’s release, call for the accountability of Israeli Occupation forces.

The WHRDMENA Coalition calls on the special rapporteur on human rights defenders, arbitrary detention, freedom of public assembly and association, and right to physical and mental health to issue statements calling for Ms. Odeh’s release and halt of her ludicrous criminalization.

Finally, the WHRD MENA Coalition reminds the international community and Israeli occupation forces of the resolution adopted (A/HRC/S-30/L.1) in which the Human Rights Council established an international commission of inquiry to investigate violations in the Occupied Palestinian Territory, including East Jerusalem, and in Israel, and it calls on this commission to visit Ms. Odeh and investigate the conditions in which she is detained on remand, and call for her immediate release and clearance of all charges.

Long live the struggles of WHRDs!

Crimes of War and Incarceration of WHRDs in MENA