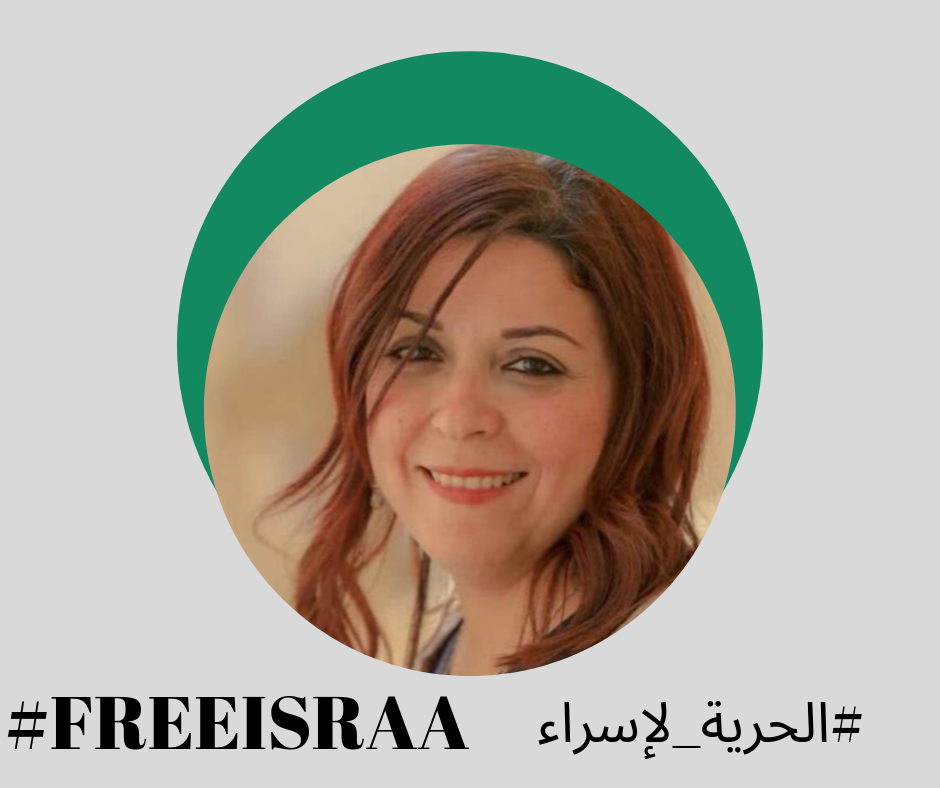 On October 12, WHRD Esraa Abdelfattah was abducted and taken to an undisclosed place of detention by plainclothes officers. Her whereabouts were revealed on October 13 after 24+ hours of enforced disappearance during which she was tortured and ill-treated by police and national security personnel. The prosecutor ordered her detention for a further 15 days while she is investigated for “joining a terrorist group”, “disseminating false news” and “misusing social media” as part of a case that also includes human rights defenders such as lawyer Mahienour el-Massry, activist Alaa Abdelfattah and lawyer Mohammad Baqer.

Following the interrogation of Esraa Abdelfattah on October 14, her said that she was tortured at the National Security Headquarters. This was confirmed in the minutes of the investigation. She was beaten and suffocated in an attempt to force her to reveal her password to search the contents of her phone. Her pictures and personal conversations.

The lawyer also said that the officer who interrogated Abdelfattah indicated that her life was linked to her giving them her password and thus the contents of her phone. Mada Masr reported that Abdelfattah began a hunger strike to protest the torture and abuse she was subjected to. It is important to add that after the lawyer revealed the torture Abdelfattah  was subjected to, a smearing press report was released aimed at misleading public opinion and inciting violence against Esraa AbdelFattah in order to deligitimize any form of solidarity with her.

Esraa Abdel Fattah is a prominent woman human rights defender who works as a journalist for Al Tahrir newspaper and website. The newspaper has been hit by several crises in recent months, which began by the censorship of the website since last May, followed by the suspension of printing and withholding the salaries of journalists working since July. WHRD Esraa Abdel Fattah has been banned from traveling since January 13, 2015, on charges of “foreign funding”; a case that targeted several Egyptian civil society organizations such as Nazra for Feminist Studies whose assets have been frozed and its director Mozn Hassan have been banned from travel, along with lawyer Azza Soliman from CEWLA.  Judicial authorities have rejected more than a petition by Esraa AbdelFattah to allow her to travel, while investigations into the case continues.

Esraa Abdelfattah’s arrest follows the crackdown on 20 September protests in which Egyptian security forces arbitrarily detained around 100 women and girls, including dozens of human rights defenders and feminists, such as Asmaa Dabees, who was arrested on 26 September.

The Regional Coalition of Women Human Rights Defenders in the Middle East and North Africa condemns the pattern of repeated abuses in Egypt, and considers this attack to be part of a crackdown targeting WHRDs in specific. Esraa Abdelfattah’s abduction and arrest followed the arrests of lawyer Mahineur El-Masry and feminist activist Asmaa Dabees. The Regional Coalition therefore reiterates its call for an end to the oppression of WHRDs and activists who are exercising their legitimate rights to defend human rights, or trying to continue their lives normally in a context of shrinking and complete closure  of the civil and public sphere.

The Regional Coalition also calls on the international community to follow up closely on the situation in Egypt as the arbitrary arrests that began in September 2019 continue in what seems an endless crackdown on human rights. The Egyptiana authorities continue to oppress civil society, organizations and people defending human rights in an unprecedented international silence.

The Regional Coalition holds the Egyptian state fully responsible for any harm inflicted on Esraa Abdel Fattah and demands her immediate and unconditional release. The Coalition also urges international organizations working on human rights, especially those working in the region to monitor and act on what is happening in Egypt with high responsibility as the potential arresting of even more human rights defenders is more likely to happen. The Egyptian authorities have succeeded in disclaiming accountability many times before along with their responsibilities towards their citizens first and the region second.

What is happening in Egypt not only affects WHRDs and HRDs personally, but also affects all justice, social and rights movements they work in, and leads to their decline and thus empties movements’ their human resources. Egyptian authorities’ disclaiming accountability is also creating an environment for many authorities in the region to also disclaim accountability and continue committing violations against human rights defenders. Calamities do not only result from natural disasters, and the amount of violations and infringements that violates all international laws in Egypt amounts to a real disaster on human rights.

We urge international organization to stand up against human rights violations in Egypt and to:

1- Demand Egyptian authorities to immediately release Esraa Abdelfattah and all detainees in Egyptian prisons who were arrested because of their legitimate human rights work, and to address the Egyptian Ministry of Foreign Affairs in public statements, along with Egypt’s permanent mission to the UN.

3- Demand the UN to form an international commission of inquiry aimed at visiting detainees and and attending trials and issuing a report to the international, regional, and national public.